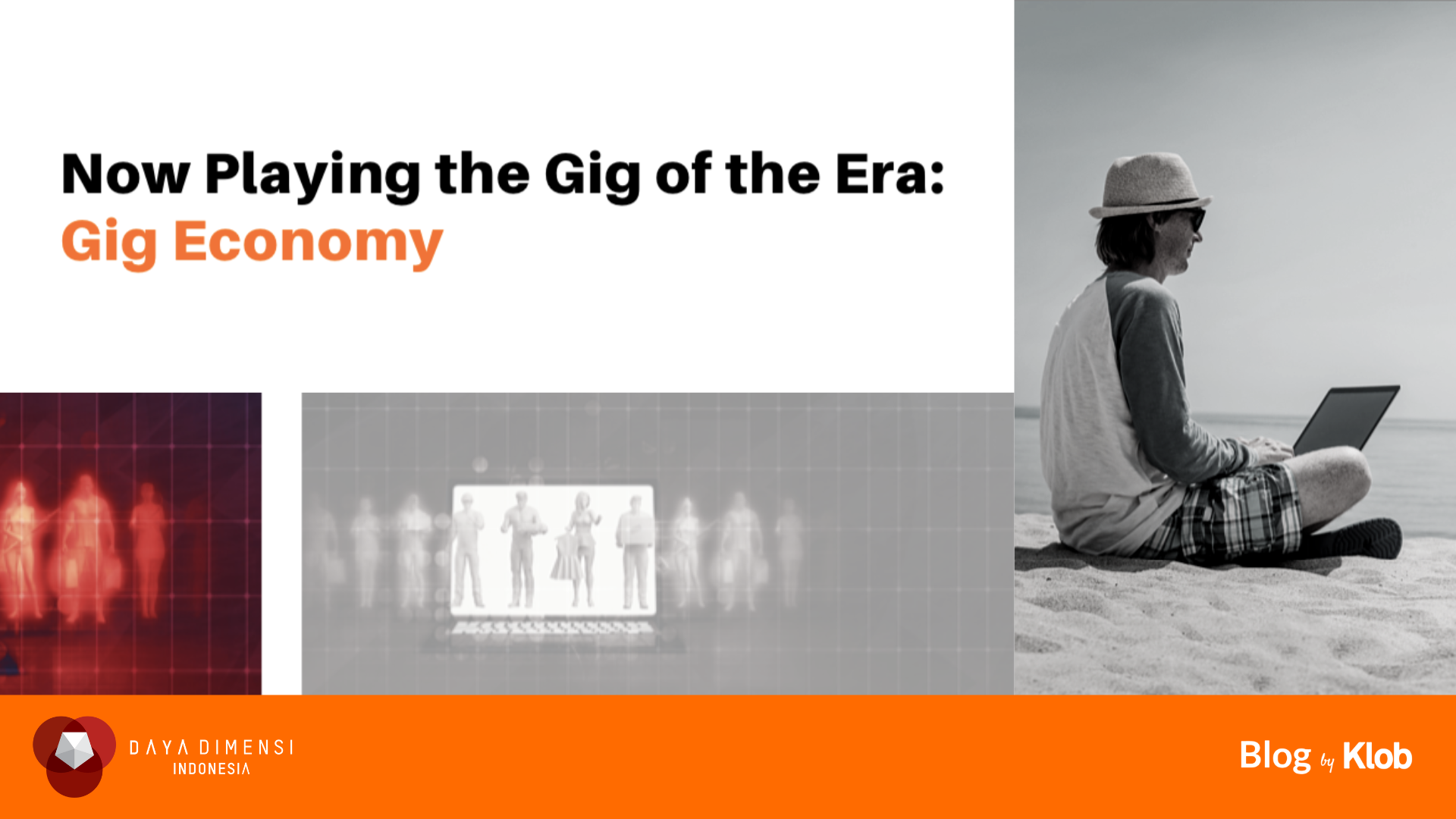 Now Playing the Gig of the Era: Gig Economy

Now Playing the Gig of the Era: Gig Economy

Remember when Kementerian Komunikasi dan Informatika (Kominfo) blocked one of the digital financial services namely Paypal? As reported by CNBC Indonesia (August, 2022), on the 29th of July, Kominfo officially blocked Paypal due to their negligence to register as a private Electronic System Operator or PSE (Penyelenggara Sistem Elektronik).

Following that policy, people are protesting against it, one of which is the freelancers who rely on their additional income from overseas clients/work. Consequently, Kominfo needs to temporarily unblock it to allow its users to secure their money on the platform. This phenomenon appears as a reminder that workers are now able to work beyond its border. The limits in the job market including geographical location, language differences, and work arrangement are starting to dissolve.

The rapid and persistent technological advancement has once again proven its power to shift the world, and in this case in the job market sector. Digital platforms emerged and aid employees and employers to connect. Workers are then given more options as to which work arrangement they prefer. More so, the company is coming up with more variety of job arrangements aside the typical fixed employment contract. All of this results in Gig Economy rising and continuously showing its notable presence.

It encompasses three essential elements including an employee earning income from a gig (task/project), an employer with a vacant gig to be completed by the employee, and a digital platform that facilitate those employees and employer (Dautova, 2020).

As stated in Dautova, the U.S. has almost 57 million of its citizen engaged in project-based or temporary contract-based jobs (Upwork, 2019). In the U.K., the number of workers who utilize the online platform to work has reached more than 4.7 million. Moreover, the trends have also reached Asian countries such as India whose freelancers contribute 40% of the overall number of freelancers in the world (Kathuria et al., 2017). Also, in China, 15% of its workforce is categorized as gig workers (Rothschild, 2018).

Along with these trends, Florene (2021) on KrASIA stated Indonesia has recorded an increase in its number of freelancers to 26% more than last year, reaching a total of 33,34 million freelancers in 2020 (Badan Pusat Statistik). Amongst them are active gig workers including Physical Gig Economy (PGE) such as ride-hailing workers who deliver their work directly in the physical environment; as well as Online Gig Economy (OGE) such as professionals who deliver their work virtually.

To bring the number to the topics, gig worker in two transportation-based services has reached a total of at least four million workers (Putri & Heeks on East Asia Forum, 2022). Additionally, Faisal, Sucahyo, Ruldeviyani, and Gandhi (2019) revealed that there is a total of 171,033 Indonesian users on the gig economy platform. 2,062 of them are active users who persistently accessed and engaged in a temporary job for the last 28 days, with the majority of work falling into creative and multimedia fields.

This is in line with Aristi & Pratama (2020) who found that most Indonesian gig workers are engaged in professional services including graphic designers, programmers, and translators. For instance, Hafiz, a graphic and animation designer who shared his story on how the blocking of Paypal affected his work to detikFinance (July, 2022). Hafiz started his ‘gig worker’ journey in 2020 and as of now, he has worked for a couple of clients from the U.S., Australia, and some European countries.

Moreover, aside from Transporation-based service and professional services, there is another category of gig economies such as asset sharing services and handmade goods, household, and miscellaneous services whose participation percentage of gig worker are lower than the previous two. These variations of the gig economy category show that it does not only taps specific classification of workers, instead, but also occurs in many job types, job levels, and job fields. In essence, the current number of gig workers is expected to continuously rise as the gig economy starts to become mainstream in the overall job market.

The question we should be asking next is how are we now in the midst of the gig economy era? One thing for sure is that the gig economy carries a promising prospect. It is not new news that the two mega ride-hailing platforms in Indonesia have contributed to the labor force and economy of Indonesia. As reported in The Jakarta Post (2020), the study by the Centre for Strategic and International Studies (CSIS) and Tenggara Strategics conducted in 2019 revealed that the ride-hailing platform contributes to 56,5% of the Indonesian labor force by providing a large number of employment opportunity for informal workers (or in this article classified as gig worker).

More so, they also drive micro businesses to flourish and more job opportunities to rise. Adding to that, specifically during the pandemic, the gig economy offers a flexible working arrangement including the working hour and station/location. This privilege allows employees with traditional 9 to 5 employment to get earn extra cash, and the unemployed to have more job options.

Unfortunately, despite its prospects and potential, the gig economy in Indonesia received a prominently low score from the Fairwork project for its fairness. The Fairwork project reported in December 2021 involved several gig economy platforms and evaluate five global principles of Fairwork such as fair pay, fair conditions, fair contracts, fair management, and fair representation.

The low scores reflect upon these reasons such as (1) the wage still excludes the work-related cost, (2) there is insufficient policy and protection towards work-related risk, (3) the contracts favor one side, and (4) there wasn’t an initiative to tackle discrimination and inequalities, and (5) gig worker’s labor union are not recognized in Indonesian law. The basis of these low scores is the fact that gig workers are still not recognized as ‘employees’ in Indonesian law. Due to that, the work standard is in favor of the employer and employees have no rights and protections in their hands.

According to Kusdarjito & Kusujiarti (2021), the Indonesian current educational system, as a vital rooting for employees’ knowledge and skills development, still remains designed to create individuals with specific disciplinary proficiency. Contrary to that, the world has become so fast-changing which results in volatile, uncertain, complex, and ambiguous working situations. In order to keep up with the rapid advancement, employee needs to equip themselves with updated knowledge and skills by being lifelong learner. Thus, the Indonesian government, as a regulator of the education system, should commit to reevaluating the current system of tertiary and vocational education and readjusting it to strive for future economic competitiveness (WorldBank, 2019 as cited in Kusdarjito & Kusujiarti, 2021).

In addition to that, an appropriate working training system should also be progressed along with the market real situation. Quoting Mr Nadiem Makarim on Tempo.co regarding Magang Merdeka,

This is in line with Salmon (2017) that proposed the importance of synergy between various faculties and departments to develop graduates with agile skills and knowledge. At the end of the day, this improvement in education quality will be good-for-nothing if it’s only applied in Indonesian big cities. In other words, to ensure growth in employees’ ability to strive in today’s economy, this improvement in education quality should also be accompanied by better education equality.

Moreover, the internet and technology are fundamental elements in the gig economy. However, the fact is, that the access and utilization of internet/technological devices are not inclusive across groups, regions, and income classes (the world bank, 2021). It is reported that 49% of Indonesian adults across different geographical locations as well as economic and social statuses are not connected to the internet. Moreover, access to fixed broadband which is commonly associated with a good quality of internet connection, is also still unequally spread across Indonesia.

These facts are definitely present as an obstacle to Gig Economy in Indonesia. Action should be taken to facilitate better equality towards internet access across Indonesia disregarding their region and socioeconomic status.

The gig economy is indeed a work scheme with great potential and prospects in Indonesia. However, it also brings its challenges, all of the parties involved –the government as a regulator, gig workers, employer/users, and gig economy platform should be involved in the growth of the gig economy positively. Moreover, the supporting media including the law and technological infrastructure should also be improved. All in all gig economy will indeed bring promising prospects, if its managed, regulated, and facilitated fairly. (HIP) 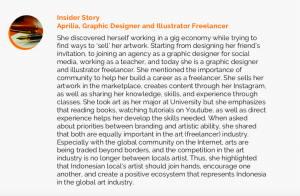