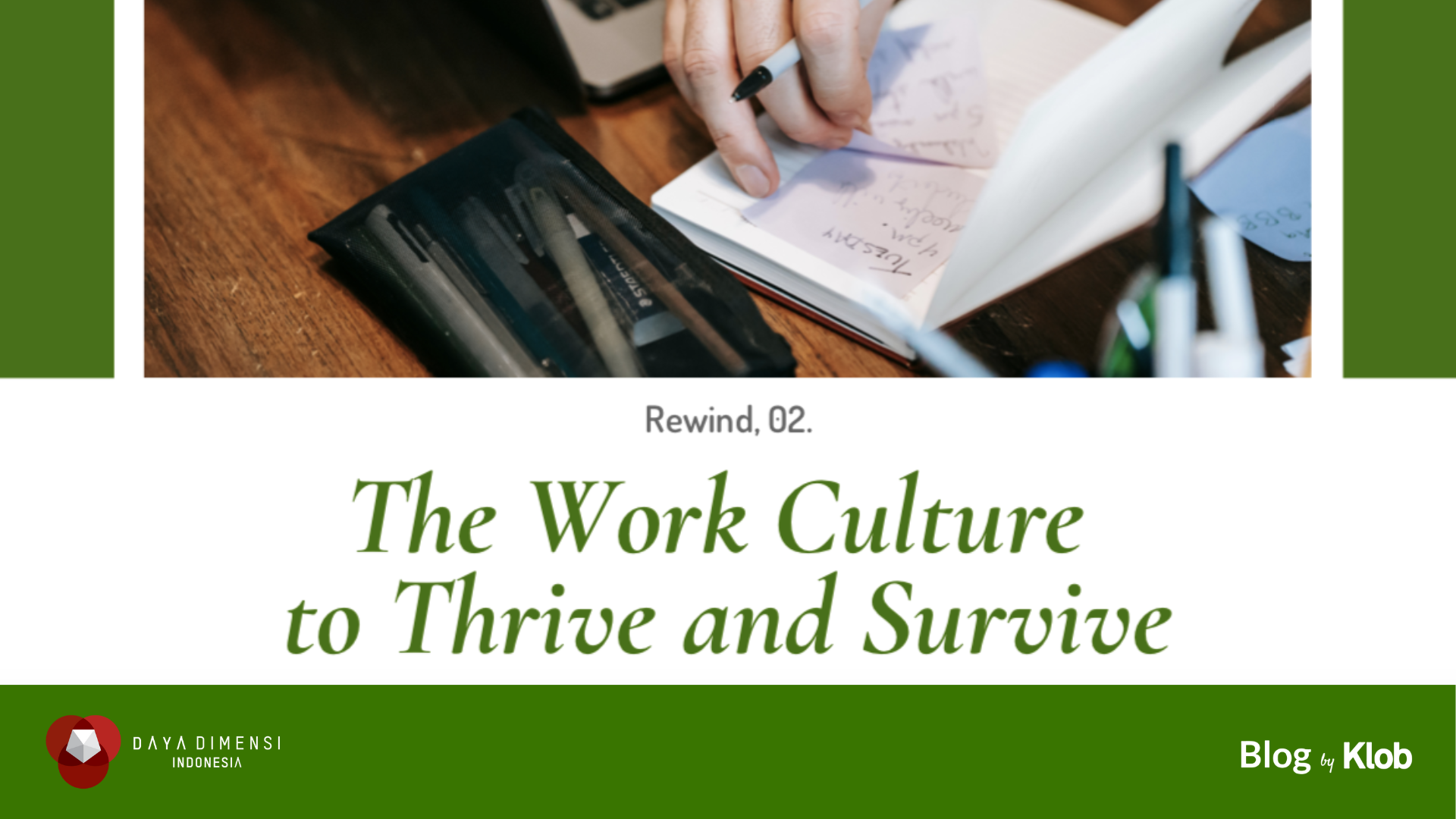 The Work Culture to Thrive and Survive

If the concept of culture is fluid and required to adapt continuously, can companies still use it as part of their identity? If yes, then how should they do it? The idea of an ideal workplace culture may have started its heyday when all these trends of working at a tech startup with lots of fun activities for employees. People started to associate the company culture they wanted to adopt with something more laidback, young, and less hierarchical like the majority of many established corporations. Before we discuss what kind of culture can make a company stand out and thrive, we need to understand the definition first. Culture refers to the set of shared and widely accepted beliefs, values, and social practices of a group (Shanafelt, 2019). Its function is to nurture trust, achieve values alignment, and strengthen workplace culture which combined together can be an effective strategy to prevent burnout (Groysberg & Slind, 2012). Aligning many different types of people to have the same vision and goals is a challenging mission. Yet, that challenge is harder as the pandemic arrives (Blattner, 2021).

As a part of companies’ responsibilities to ensure the employee’s safety and health while still maintaining the business operations, they have to opt for a work from home policy. Despite its pros and cons, working from home was transforming part of the essential working culture such as human interaction and communication. These human connections are and will always be an integral part of building and sustaining a culture in office settings. And now companies who want to embrace hybrid working need to put real effort into building the culture of hybrid working. Some research has proven that a strong and effective culture has successfully managed both employees and the business to survive pandemics. So what is the secret formula?

The not-so-secret formula is effective communication. One study found that there are two main factors that could deteriorate a workplace culture which consists of lack of communication and too many changes in workload (Philips, 2020). But to what extent a communication approach can be considered as effective?

As a company that has one shared mission the delivery of a message, especially in a time of turbulence, must be clear, consistent, and also sincere. Communicating is much simpler when face to face but today as we are moving to the virtual world in which we catch fewer gestures, and sometimes a delay in a voice too so we have to make clear and concise text messages that anyone can comprehend.

Another indicator of a good culture that is linked to good communication is transparency where you can have an honest conversation with your manager or colleagues about your life outside work. It also requires transparency between both parties so genuine response and empathy can emerge to find the best solution (Nadkarni et al, 2021). As we all know that some of us do not have the ideal situation to have a home office. Many researchers also found that despite increased productivity while doing remote working it also has some side effects such as burnout issues which were perceived differently across gender and generations. In that case, women and the younger generation are more affected by this situation.

After we spell out the things that count as an indicator of good culture, there is one more thing that would set all the foundations of good culture: a leader. The involvement of a leader is very important in this situation where they get to motivate, be a role model, and even encourage to adopt new technology (Cortellazzo, Bruni, Zampieri, 2019). Communication and transparency are ingredients of creating a culture of collaboration and knowledge sharing which is something essential to running a company. Leaders should practice it first so the other employee would see it as something less like jargon or a temporary solution. Right when everyone sees their leaders doing the same things, they will adapt to the new habit with less resistance. Additionally, we also have to broaden the terms for leaders that are not only limited to the higher manager. Based on Udemy Workplace Learning Trends Report, companies that extend their leadership training for all employees are 4 times more likely to outperform those who don’t.

So to keep the team intact, the strategy has to shift. Back then we valued and focused on high performance but now we should allow more space for empathy, understanding, and mutual support. There are five elements companies nowadays have to embrace: flexibility, supportiveness, the decisiveness on important and urgent matters, transparency, and confronting conflict. Things such as individualism and result orientation can be put aside for a while. Right now is the right time to put people first in your organizational culture hierarchy. (NHB)