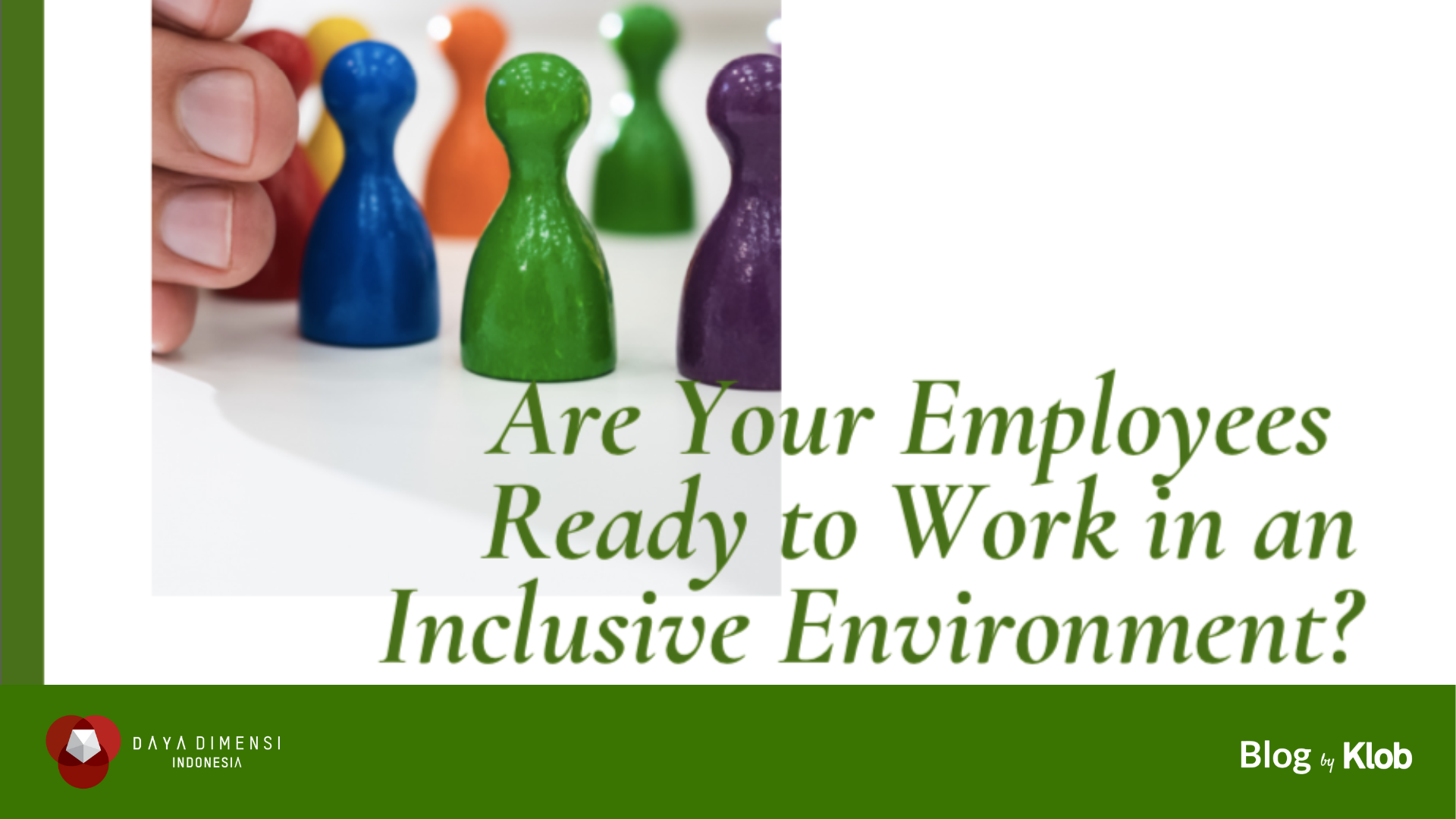 Are You Ready to Work in an Inclusive Environment?

Are Your Employees Ready to Work in an Inclusive Environment?

Nowadays, the understanding of diversity and equality in the workplace has become a very important point when a company wants to carry out an equal and inclusive working environment. To do so, experts believe that the right perspective or mindset will help companies to create an inclusive working environment and take the right steps for more vulnerable employees, for example, women and people with disabilities, to be hired into the company and obtain an equal working condition and situation that fits with their capacities and skills.

However, based on the Ministry of Manpower records obtained from the Survei Angkatan Kerja Nasional (Sakernas), there are 6.88 million people with disabilities working in Indonesia, or around 5.25 percent of the total working population in February 2021, which decreased by 12.61 percent compared to the previous year in the same period. Based on the business sector, most people with disabilities work in the agriculture, forestry, and fishery sectors (3.32 million people), wholesale and retail trade sector (1.04 million people), and manufacturing sector (786.81 thousand people).

However, these concerns were proven to be wrong by much previous literature, as compiled by Lindsay et al. (2018). Unger (2002) states that in reality, employees with disabilities have an average or above-average score on performance, safety records, and attendance based on company or employer ratings. Similarly, Hernandez. and McDonald (2007) found no differences in

performance or need for supervision between employees with and without disabilities. Other literature even reported that hiring people with disabilities will be beneficial for the companies. Kaletta et al. (2012) found that workers with disabilities do not experience higher levels of lateness or absence in comparison to employees without disabilities, and they also had significantly lower turnover rates than their counterparts who did not have disabilities. When it comes to cost, which is a factor that concerns both the global and Indonesian employers, about 70% of employers identified more benefits associated with hiring people with disabilities rather than costs, especially related to training costs (Graffam et al., 2002).

Nevertheless, it is important to know the readiness of the company to implement an inclusive working environment to inform them how ready they are and what they need to prepare for, as hiring people with more disabilities has become an obligation for the companies and brings many benefits to them as well. This is why an Inclusive Readiness Survey is needed. Inclusive Readiness Survey is an assessment tool that measures the readiness of employees as a group to work in an inclusive organization environment and work along with people with disabilities. This assessment tool is developed by Klobility and DDI through psychometrics test processes and maturation of disability concept. There are four aspects that were measured through this survey, which include:

A series of behaviors or competencies that are perceived to be possessed by an individual. This aspect measures how individuals perceive themselves in building trusting relationships and creating an inclusive environment.

Personal characteristics that are crucial to be recognized as effective behavior stimulants. This aspect measures certain attributes, which include acceptance of others, awareness of others’ emotions, emotion recognition and altruism.

Individual knowledge that is related to disability and inclusion. This aspect measures an individual’s knowledge of disability type and its extent, law, and policy, the benefit of diversity, challenges and strategy.

The results of this survey will help employers to understand their employees’ readiness to work alongside people with disabilities. Aside from noticing the readiness of their own employee, employers also need to keep in mind that employees with disabilities can work together with other people as long as the assignments are in accordance with their capacity despite having limitations. As it has been proven through previous studies before, hiring employees with disabilities could be very beneficial for the companies, both directly and indirectly. (OCY)