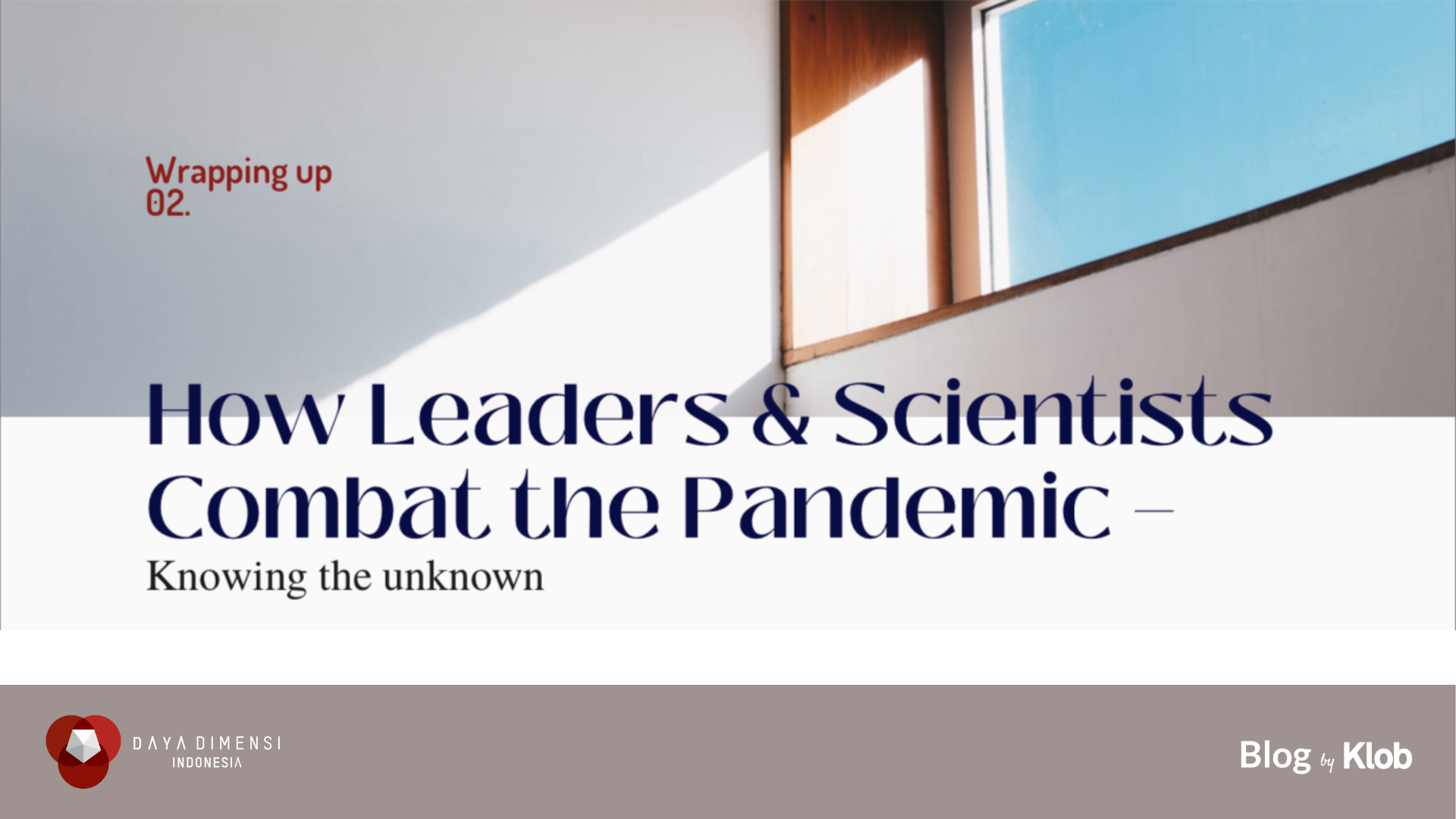 How Leaders & Scientists Combat the Pandemic

It was a sunny day, as people gathered, unmasked, no seat distancing, as if the pandemic had totally banished from the earth, to watch a tennis game. To their surprise, there is one person, sitting amongst the audience, who made all these impossible possible.

When the host mentioned her name the applause was pouring down on her, she is known as Sarah Gilbert. The one who invented a covid vaccine Astrazeneca with her team. Her response was a humble nod and a smile. There was no grand gesture for someone who is seen as a hero for saving the world from a prolonged crisis. Perhaps there is a reason why all heroes wear masks. They want to stay true to their intention and do not look for a cheering crowd or a spotlight. But before we assume the heroic essence and small gestures of the founder, it would be very interesting to dissect and deep dive into her principles of work, leadership, and breakthrough.

At the moment when the crowd’s standing ovation happened, a continent apart another crowd was stumbling down over the surging case of Covid-19 in June 2021. The number of fatalities was rising worldwide, followed by countries imposing a border restriction. Although some vaccines were being rolled out, yet the distributions and their regulations were not made clear by the authorities. As the healthcare system was taking emergency action to save everyone’s life, people were flustered by confusing information. Ideally, people needed a sound and reliable statement from the authorities to help mitigate this pandemic. The government, scientists, and public health regulations need to work in conjunction to provide safety for everyone. To understand what it takes to be an inspiring leader with meaningful contribution, we pick Prof. Gilbert’s profile as an example considering her as a leader and a scientist.

Leadership has no one definite formula for success, it is a highly context-dependent concept. But one thing is for sure, we admire a wise leader with a clear mind and a just morality. To reach that state, a leader requires a high intellectual capability. Yet high quotient is not the only key, they also need to accept that sometimes the truth or the existing verified information they believe can be falsified, which actually can help them to innovate continuously. Any scientist is familiar with the terms of falsifiability, yet there is another extent to that concept which is introduced as intellectual humility.

Intellectual humility is defined as a recognition of the falsifiability of a particular personal belief (Leary et al., 2017). In addition to that, it helps us to avoid being trapped in egoistic and subjective personal views as it allows another party and new information to construct reality (Ballantyne, 2021). An openness to new opinions and facts is a part of intellectual humility that requires us to engage in an act of investigative behaviour (Koetke, Schumann & Porter, 2021). In her vaccine project journey, Prof. Gilbert succeeded in promoting this trait. She diligently updated her knowledge regarding the most recent research of the virus while developing the vaccine. It was not a grand breakthrough but more of steady small steps.

The virus is a catastrophic snowball as it spreads out and it takes countless lives then forces us to live in a completely different way. These extreme changes force us to implement new behaviour, the pressure is also on Prof Gilbert’s team as she races with time to create a breakthrough, a vaccine within less than a year. As the leader of the team, Prof Gilbert shows a predominant level of intellectual humility by her persistence in learning to understand better this novel virus strain is different from what she already knows. She worked through it in constant and small steps rather than a grand breakthrough. Prof Gilbert proves the behavioural manifestation of intellectual humility by stating that they are not racing with other vaccine developers and not taking any profit from the vaccine as they represent their university. This behaviour is showing that she lacks concern for her status or prestige and focuses heavily on the greater good for humankind.

Intellectual humility is not exclusively possessed by leaders or scientists. It is also necessary for us to implement it on a daily basis. Especially in times of uncertainty (in this case, the pandemic), our headspace is potentially being decluttered by the overloaded information stream. We can hardly pick the right information from the noises. This situation might prevent people from taking the right decision to avoid any risk and harm, or in this case, the virus. As people are not able to take preventive measures, not only does it widen the spread of misinformation but also the spread of the virus that creates a pandemic. To counter this phenomenon, we do not tell the media to stop sharing misleading information but we personally have to possess the ability to investigate the validity of the information we read. As we feed ourselves with reliable and updated news about the current situation to control our decision, we also have to know that there is an endless possibility that we still do not know and how it will unfold in the future. Then, do the unknown threaten our stability?

Aside from intellectual humility, there is another attribute that supports the wisdom in making decisions in an unprecedented time, it is called epistemic humility. Scientists and governments are demanded to make decisions under the pressure of a rising death toll. Closing borders and imposing restricted public activities are made under uncertainty of what might unfold after it. There is always a potential for mistakes and fatalities. But admitting that you do not know how the situation might be despite sounds as unreliable or incapable actually displays epistemic humility and openness to dynamic situations. As global pressure weighs down and inaccurate information is everywhere, people demand everything to work faster to predict the future. Sometimes it could lead to the inaction of political decisions as they want to be certain instead they wait for too long before making the right decision. One of the examples of epistemic humility was when Finland’s Prime Minister stated how they actually do not have complete information about the ongoing situation. Instead of creating doubt, taking an incremental step in making decisions while updating the situation actually fosters anticipation, experimenting, and taking adaptive action (Lin and Petersen, 2013; Folke, 2006). Thus, having the humility to embrace the unknown is beneficial for leaders or scientists to challenge their outdated beliefs and collaborate with more people to create more adaptive and innovative solutions when things dynamically change. (NHB) 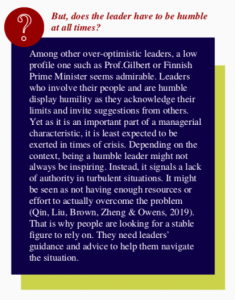